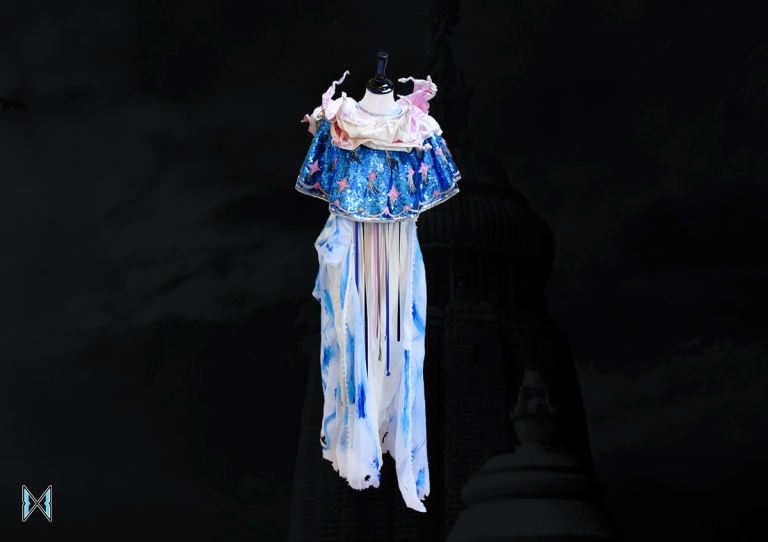 Puri is a sculpture dress in peace silk and eco-friendly textile ink, that belongs to my Srngar Couture™ series.

This is what my webpage says about Srngar Couture garments, a novelty concept I developed inspired by the ancient:

“A Srngar Couture™ garment tailored for human customers is created according to a yantra diagram. This yantra diagram is inspired by a mood board containing impressions of a sacred garment that was previously worn by or is currently belonging to a Temple Deity. The sacred garment is incorporated into the design (…)(or) (…) created with the Temple Deity’s garment in mind. The practice of wearing garments previously worn by Temple Deities is an ancient Eastern tradition.”

The story of the ‘Puri’ sculpture dress began on a sunny afternoon as I was walking by what was to become the new site of the Mandali Mendrilla Atelier, the dreamy estate of Chateau de Petite Somme near Durbuy in the Belgian Ardennes.

Chateau de Petite Somme is also known as Radhadesh and it is the location of the Museum of Sacred Art (MOSA) – currently exhibiting my art installation named Mandala of Desires (Blue Lotus Wish Tree) – above which gallery space our team has set up an atelier and showroom.

The sattvic, meditative atmosphere of the estate is conducive to designing Yantra Couture garments. At the heart of the Chateau is a Hindu temple presided by Temple Deities Sri Sri Radha Gopinath. The Chateau also hosts a healing retreat center. The complex receives thousands of visitors every year being one of the tourist attractions in the area. An interesting piece of history – one of the first Dracula movies was filmed in the Chateau. The Chateau was originally built in the 11th century.

As I was walking by the Chateau, the temple priestess was exiting the temple with clothing that used to belong to the Deities and was now, as per custom, meant to be given, as a blessing, to special friends of the Deities. The priestess was inspired to gift several of those clothing items to me, which belonged to the deity of Sri Jagannath, also residing in the Temple Altar at Radhadesh.

Sri Jagannath has a very special meaning to me as, together with my late husband Elisha Nitai Drury and a group of artists, I used to stage art installations themed around Sri Jagannath’s Ratha Yatra (cart procession) at the Burning Man festival in Nevada. In the mood board, one may see an image of Sri Jagannatha as sitting surrounded by sacrificial flames in a yajna-kund, which was the form that appeared to us when we visited Puri after our first Burning Man adventure.

Here is an image of that same form as commissioned by Nitai from renowned artist Drdha Vrata Gorrick: 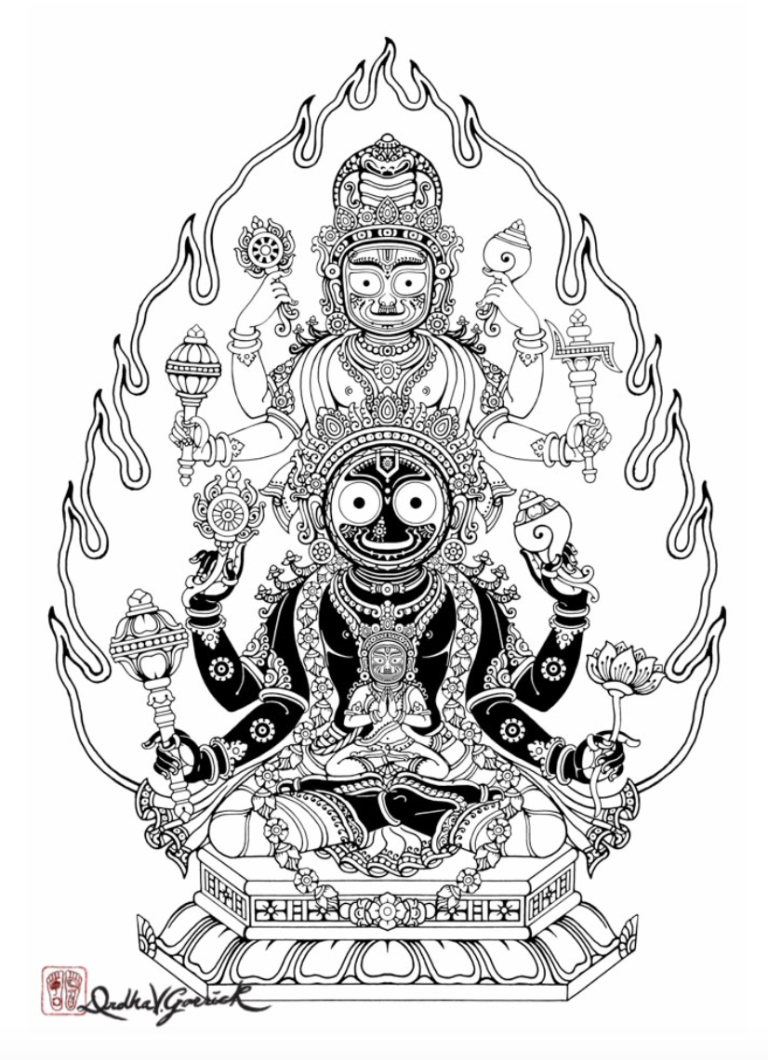 And so, one of the items worn by Sri Jagannath, hand embroidered in an atelier in Vrindavan, India, became the inspiration for the dress named ‘Puri’.

Puri is a holy place in India where the deity of Sri Jagannath was originally installed hundreds of years ago.

The body of the dress is created to resemble a conch shell enveloped in waves of the ocean, just like the mystical city of Puri, which is designed as a conch bearing a mandala, the temple complex, with the Indian Ocean at its shores.

The neck of the three-piece dress (in which each piece may be worn individually) is created in the shape of an adjustable lotus flower collar which is placed around the neck of the embroidered mini-cape. Those two items form the lotus of the mandala inside the Yantra Dress.

The tears on the waves sewn into the dress, represent the tears of love in separation between Radha and Krishna, which, besides the mountains of food freely distributed to pilgrims in compassion, is the predominant emotion in the city of Puri.

In separation, lovers feel their loving emotions to peak in ecstasy, therefore separation is described to be the highest form of ecstasy in spiritual love.

The waves and the lotus-like collar also resemble flames, as love in separation is described to be wet with tears, yet burns like a blazing fire, the sparks of which are visible in the art depicted on the mini-cape. 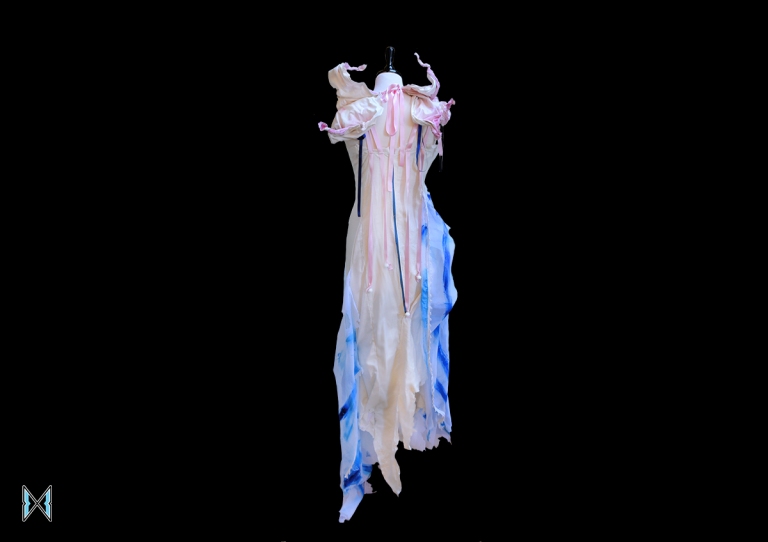 The Puri dress was premiered at the Zagreb Fashion Week this year (backstage editorial image by Filip Cargonja):